If you’ve been on the Internet for even just a minute anytime in the past week, you would have heard of the show and the wild rollercoaster of emotions that it brings its viewers on.

For the uninitiated, Squid Game is an original Netflix K-drama series in which hundreds of heavily debt-ridden contestants accepted an invitation to compete in children’s games for an attractive cash prize. The stakes are high – lose a game and you’ll die. 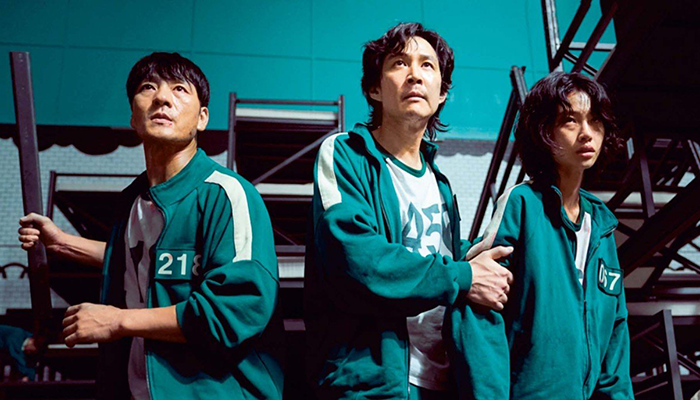 In particular, Malaysian nail salon Maniqure released a series of press-on nail designs that are inspired by the hit show that are too pretty not to share.

Read on to see all the looks – but take note that there may be spoilers. 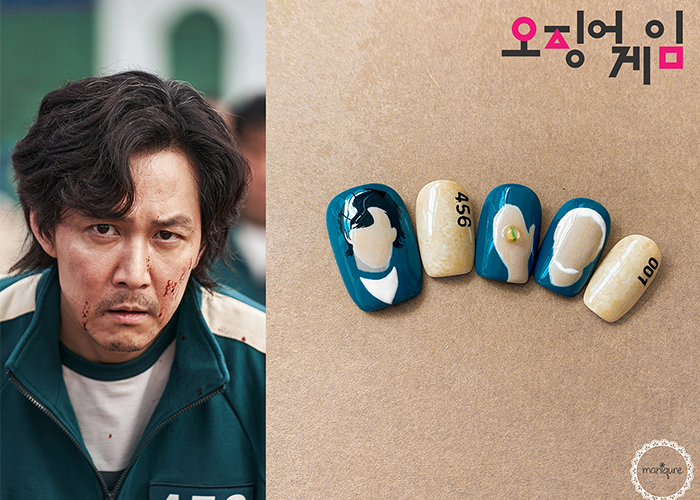 Fans of Squid Game were left in an emotional wreck after the tear-jerking episode 6.

This set of nails is inspired by the scene when main characters Gi Hun and Il Nam had to play the marble game against each other in order to proceed to the next game.

Named “Gganbu” (a Korean slang that means “neighbourhood best friends”)  as a tribute to the pact that the two characters made to each other, this nail set features the silhouette of the two characters, their player numbers, along with a marble jewel for a 3D effect.

Stick to the team 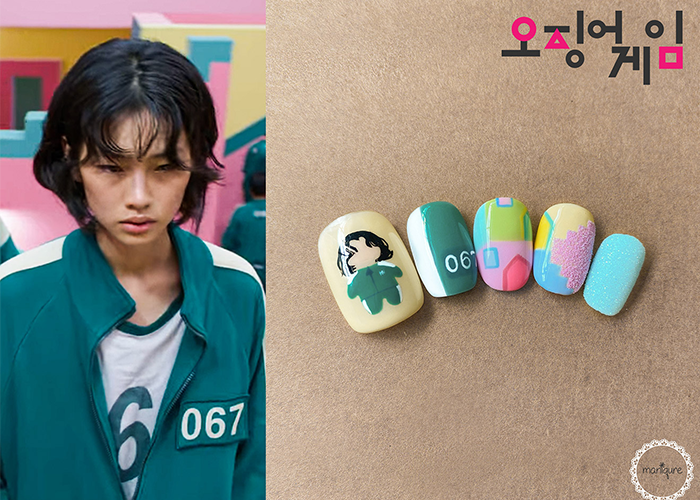 If you love the character, you may want to check out this set of nails that features the silhouette of her in her jumpsuit, her player number, as long as colourful designs that are reminiscent of the bright hallways of the game arena.

Stick to the Team nail set retails for approximately S$54.70 at Maniqure. 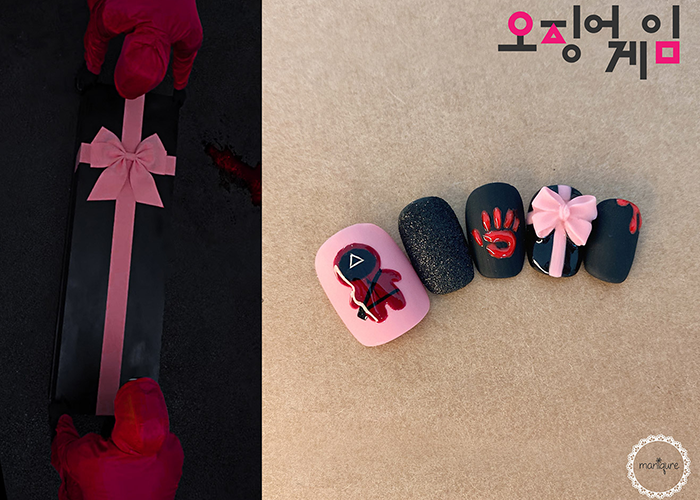 The masked soldiers in Squid Game may not have names or be seen, but their iconic uniforms and masks have certainly left a deep impression.

This nail set is inspired by these characters and the message of death that is associated with them.

Complete with a bloody handprint, dripping blood, their uniforms, and the memorable coffins with pink bow, this eerie and dark design is perfect for those who are drawn to the sinister vibe of Squid Game. 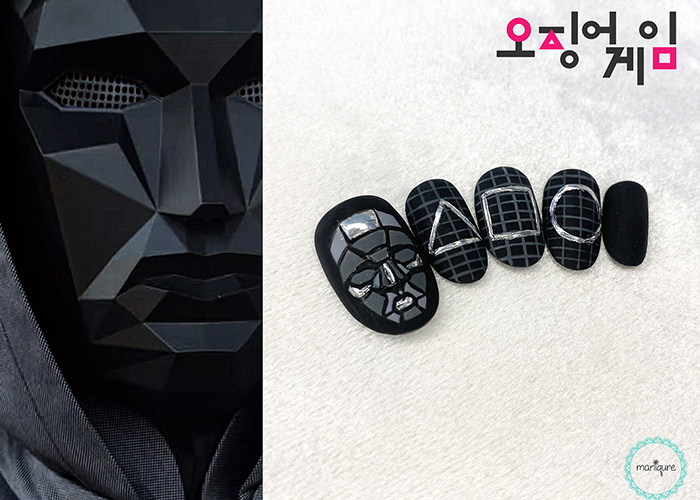 Decked out in a full black hooded trench coat and a unique mask, the Front Man gives off an ominous and mysterious vibe. This fully black nail set captures this in its design. 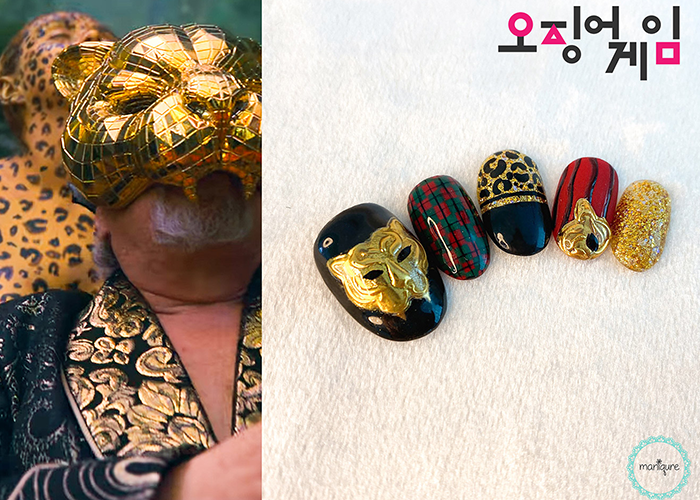 Finally, here are the characters who received front-row seats to the games – the VIPs. Their flashy gold animal masks and expensive suits made these rich men hard to forget. This exotic nail set will add some opulent flair to your ensemble. 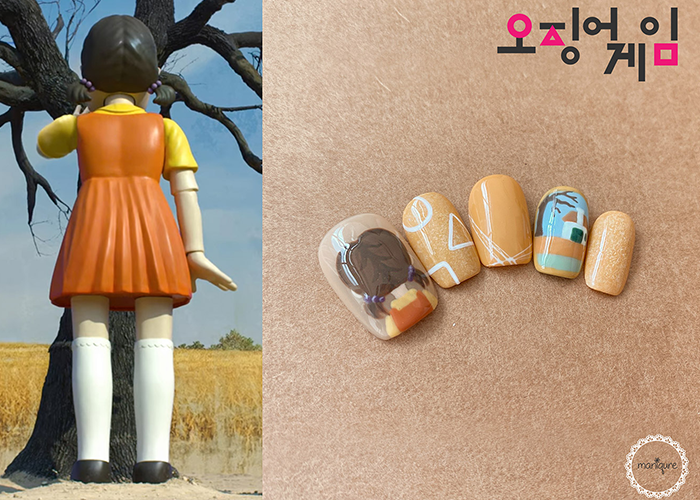 Perhaps the most famous game of the series, the “Red Light, Green Light” game that opens the series in a gruesome and shocking manner introduced us to the game’s meaning of the word “eliminated”.

This cruel reality was shocking to audiences, and the creepy doll that is the star of this game continues to haunt our nightmares. The doll eerily says, “Mugunghwa kkoci pieot seumnida”, which translates to “the Mungunghwa flower has blossomed”, a line that has taken over our TikTok feed.

This set of nails is inspired by this haunting doll and how the arena looked.

The man with the umbrella 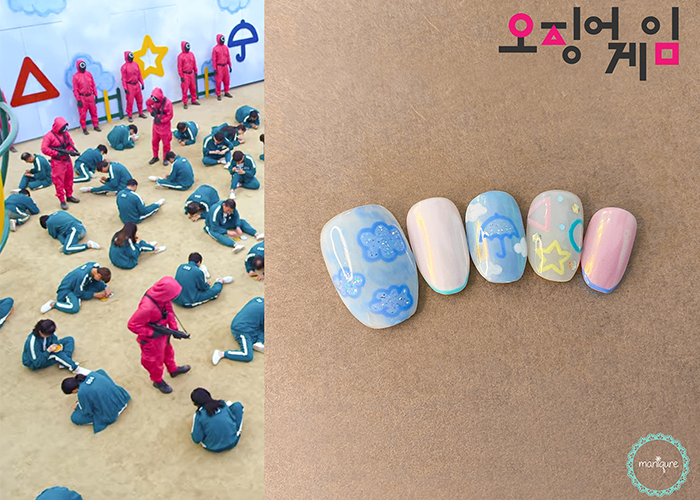 The second game in Squid Game, which features the Dalgona candy kept audiences on the edge of their seats and was filled with plenty of nerve-wrecking violence despite the sweet origins of the game.

The game arena looked like a kindergarten playground, and this set of nails is inspired by that. Those who love dainty pastel colours are going to love this design.

The Man with the Umbrella nail set retails for approximately S$52.20 at Maniqure.

Childhood and one lucky day 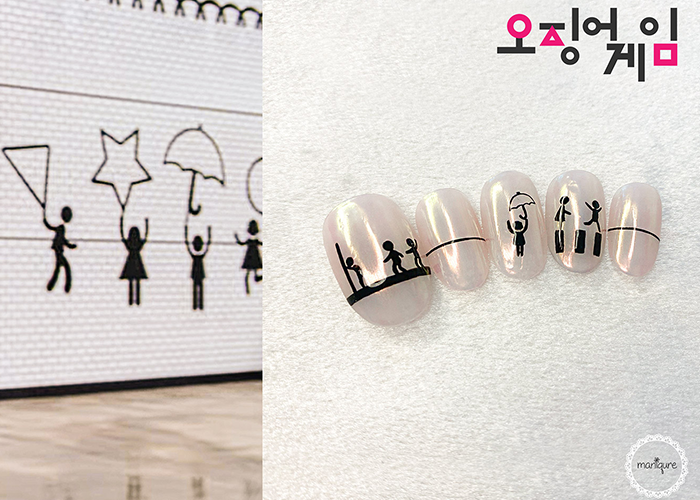 An easter egg for viewers: the wall of the dorms actually hold clues for the games that the contestants would go on to play.

The simple graphic designs of the traditional Korean children’s games were actually hidden in plain sight behind their bunk beds, but it seemed like the players were too busy fighting each other to notice them. 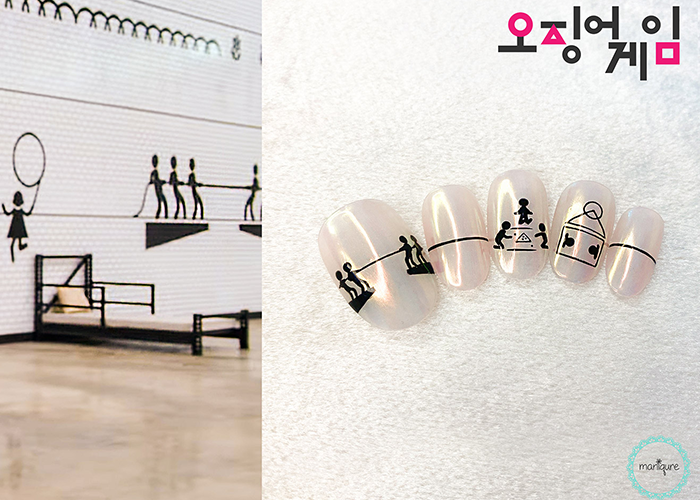 This set of nails captures the graphic drawings that were on the wall, and you’ll get to have all the games played, literally on your fingertips.

Childhood and One Lucky Day nail sets retail for approximately S$60 at Maniqure. 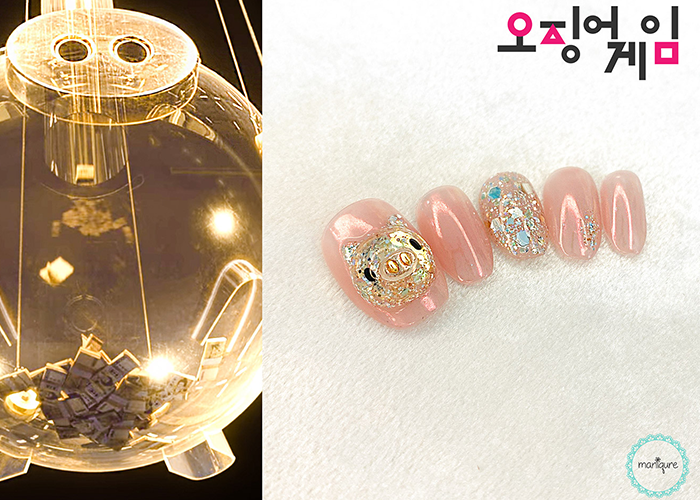 The very thing that drove the contestants to fight tooth and nail to get to the end: a giant piggy bank filled with 45.6 won in cash.

This nail set pays tribute to this with a pig motif and glitter, which hopefully make you feel richer, or at least give you a bit of luck.