Tuesday, August 2, 6:30 pm
Maya Payne Smart, author of Reading for Our Lives: A Literacy Action Plan from Birth to Six
in conversation with Dr. Dipesh Navasaria, in-person at Milwaukee Public Library Centennial Hall, 733 N Eighth St - This event is currently at capacity, but we're playing with ways to increase capacity, including an overflow room where you can watch the program on video and still get your book signed and meet the author.  When you can register again, this is where you'd do it!

Award-winning (and Milwaukee-based!) journalist and literacy advocate Maya Payne Smart appears with her new book, Reading for Our Lives, which provides a clear, step-by-step guide to helping your child thrive as a reader and a learner. Cohosted by Milwaukee Public Library and in conversation with Dipesh Navasaria, Associate Professor of Pediatrics at UW's School of Medicine and Chair of the Reach Out and Read Board of Directors.

When her child went off to school, Maya Smart was shocked to discover that a good education in America is a long shot, in ways that few parents fully appreciate. Our current approach to literacy offers too little, too late, and attempting to play catch-up when our kids get to kindergarten can no longer be our default strategy. The brain architecture for reading develops rapidly during infancy, and early language experiences are critical to building it.

Reading for Our Lives challenges the bath-book-bed mantra and the idea that reading aloud to our kids is enough to ensure school readiness. Instead, it gives parents easy, immediate, and accessible ways to nurture language and literacy development from the start. Through personal stories, historical accounts, scholarly research, and practical tips, this bookpresents the life-and-death urgency of literacy, investigates inequity in reading achievement, and illuminates a path to a true, transformative education for all.

Maya Payne Smart is a literacy advocate who has served on the boards of numerous library and literacy organizations. She and her family live in Milwaukee, where she serves as affiliated faculty in educational policy and leadership in the College of Education at Marquette University.


Wisconsin journalist and Wisconsin Examiner Editor-in-Chief Ruth Conniff appears at Boswell with her new book, Milked, in which she introduces us to the migrants who work on dairy farms, their employers, and the surprising relationship that has formed between these two groups of people. In conversation with Joy Powers of WUWM's Lake Effect.

Conniff’s new book is a compelling portrayal of the lives of farming communities on either side of theU.S.-Mexico border and the connections between them. In the Midwest, Mexican workers have become critically important to the survival of rural areas and small towns - and to the individual farmers who rely on their work - with undocumented immigrants, mostly from Mexico, accounting for an estimated 80 percent of employees on the dairy farms of western Wisconsin. A unique and fascinating exploration of rural farming communities, Milked sheds light on seismic shifts in policy on both sides of the border over recent decades, connecting issues of labor, immigration, race, food, economics, and U.S.-Mexico relations and revealing how two seemingly disparate groups of people have come to rely on each other, how they are subject to the same global economic forces, and how, ultimately, the bridges of understanding that they have built can lead us toward a more constructive politics and a better world.

From David Maraniss, Pulitzer Prize-winning author of A Good American Family: "From the back roads of Mexico to the dairy farms of Wisconsin, Milked is a wondrous and important work of 'going there' reportage. Ruth Conniff breaks through so many misperceptions and stereotypes to reveal the commonality of the human experience." David Maraniss is appearing at the Milwaukee Public Library on August 17 for his great Jim Thrope bio - more info on our upcoming events page. Look for the link.

Ruth Conniff is the Editor-in-Chief of the Wisconsin Examiner and Editor-at-Large and former Editor-in-Chief of The Progressive magazine. She has appeared on Good Morning America, C-SPAN, and NPR and has been a frequent guest on All In with Chris Hayes on MSNBC.

Thursday, August 4, 7 pm
Lydia Conklin, author of Rainbow Rainbow
in conversation with Barrett Swanson for a virtual event - click here to register for this event.

Boswell Book Company hosts award-winning writer Lydia Conklin for an evening of conversation about their new book, Rainbow Rainbow, a fearless collection of stories that celebrate the humor, darkness, and depth of emotion of the queer and trans experience that's not typically represented. In conversation with Barrett Swanson, the Wisconsin-based author of Lost in Summerland.

In this exuberant collection, queer, trans, and gender-nonconforming characters seek love and connection in hilarious and heartrending stories that reflect the complexity of our current moment. A nonbinary writer on the eve of top surgery enters into a risky affair during the height of COVID. A lesbian couple enlists a close friend as a sperm donor, plying him with a potent rainbow-colored cocktail. A lonely office worker struggling with their gender identity chaperones their nephew to a trans YouTube convention. And in the depths of a Midwestern winter, a sex-addicted librarian relies on her pet ferrets to help resist a relapse at a wild college fair.

Time Magazine calls Rainbow Rainbow one of their Most Anticipated Books of 2022,and says the book "highlights queer, gender-nonconforming and trans characters. Most are seeking some sense of connection... Conklin portrays them all with warmth and compassion." And from Adrienne Westenfeld of Esquire: "Effervescent… Conklin’s compassionate stories are so accomplished and sure-footed that you’ll be shocked to learn this is their debut."

Lydia Conklin’s writing has appeared in Tin House, American Short Fiction, and The Paris Review, and they have received a Stegner Fellowship, three Pushcart Prizes, and a Creative Writing Fulbright in Poland. They’ve drawn comics for The New Yorker and The Believer and are currently the Zell Visiting Professor of Fiction at the University of Michigan. Barrett Swanson is a Contributing Editor at Harper’s Magazine and his writing has appeared in Best American Short Stories, Best American Nonrequired Reading, and several editions of Best American Essays.

Friday, August 5, 2 pm
Jerry Apps, author of Meet Me on the Midway: A History of Wisconsin Fairs
a virtual event - click here to register.

Boswell is pleased to host a virtual event featuring beloved Wisconsin historian and author Jerry Apps for a conversation about his latest book, Meet Me on the Midway, an exploration of the history of county and state fairs in the Badger State. Cohosted by our friends at Books & Company in Oconomowoc. 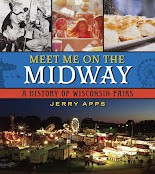 Jerry Apps chronicles Wisconsin’s fairs from their earliest incarnations as livestock exhibitions to today’s multitude of exhibits and demonstrations, grandstand entertainment, games and rides, and competitions of all sorts. Drawing on his extensive research, interviews, and personal experience as a 4-H leader, county extension agent, fair judge, and lifelong fairgoer, Apps takes readers back through 178 years of Wisconsin fair history, covering everything from horsepulling and calf-showing contests to exhibit judging to the roar of gasoline engines powering the midway rides.

Apps evokes the sights and sounds of fairs through the ages while digging in to the political and social forces that shaped the fair into an icon of our rural heritage. Illustrated with vintage and modern photos and featuring the voices of exhibitors, judges, volunteers, and visitors, Meet Me on the Midway vividly captures the thrills and cherished memories of these beloved annual gatherings.

Jerry Apps is author of books such as When the White Pine Was King, Living a Country Year, and Every Farm Tells a Story. He is Professor Emeritus at the College of Agriculture and Life Sciences at UW-Madison as well as a former county extension agent. He exhibited cattle and other projects at county fairs as a 4-H member and later served as a county fair judge.

Our Adriana Trigiani event is now virtual and rescheduled for Monday, August 8 at 7 pm. At this time, we are not taking new ticket purchases.

Copyright Boswell Book Company 2014 www.boswellandbooks.com
Back to Feed
Use left/right arrows to navigate the slideshow or swipe left/right if using a mobile device