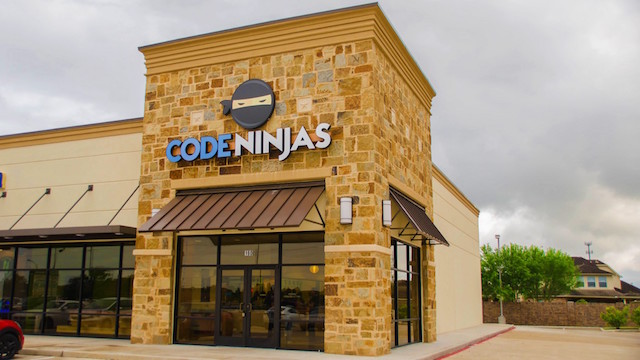 In this FDD Talk post, you’ll learn the following:

20 Things You Need to Know About the Code Ninjas Franchise

1.  Near the end of May 2019, Code Ninjas crossed yet another milestone – the opening in Spring, Texas of its 100th franchise location. With 300+ additional locations in the pipeline (at the time of the announcement), Code Ninjas was also ranked among Entrepreneur magazine’s Fastest Growing Franchises and Top New Franchises – a testament to the company’s success and growth since its launch just two years prior.

2.  Although Code Ninjas has centers nationwide, the milestone 100th location in Spring, Texas falls in the backyard of the brand’s corporate headquarters and flagship location in Pearland, which opened in 2017. Local entrepreneurs and owners of the new location, Wendy and James Nguyen, welcome parents to visit the center for a tour and a complimentary game building session for their children.

3.  James Nguyen, owner of Code Ninjas in Spring, said, “It’s an honor to be part of the Code Ninjas family and to know that we have helped play a vital role in the brand’s growth. We are thrilled to have the opportunity to work alongside the Code Ninjas corporate team and our fellow franchise partners to live out the brand’s mission of teaching kids how to code in a fun way while learning valuable life skills.”

4.  Entrepreneur’s highly-competitive Fastest-Growing Franchises list recognizes the 150 companies with the greatest franchise unit growth in North America, based on its net franchise-unit growth in the United States and Canada from July 31, 2017 to July 31, 2018, as part of data submitted for Entrepreneur’s Franchise 500 ranking. As a result of its exceptional growth – opening 81 units over the course of one year – Code Ninjas was ranked No. 66, demonstrating the brand’s rising popularity with both franchisees and customers.

5.  In addition, Code Ninjas was ranked No. 60 in the publication’s Top New Franchises list. The ranking recognizes the top 100 new rising stars in franchising and is based on more than 150 data points in areas including costs and fees, size and growth, franchisee support, brand strength, financial strength, and stability.

6.  David Graham, founder and CEO of Code Ninjas, added, “We are honored to be recognized by Entrepreneur in two of its prestigious rankings and are humbled to be included among franchising’s finest brands. Reflecting on Code Ninjas tremendous growth over the last couple of years and seeing how far we’ve come starting from ground zero, for us to reach 100 open locations in such a short time makes me so proud to be part of a system so passionate and dedicated to changing the lives of kids in communities around the world.”

8.  The new curriculum, spearheaded by Grant Smith, vice president of education for Code Ninjas, targets kids aged 5-9. Reading skills are not required for the new program, which allows younger children enrolled in courses as early as kindergarten and those with learning disabilities to have access to learn logic, problem solving, and teamwork skills early-on.

9.  Smith said, “Kids are already using technology at a young age – some can even navigate it better than their parents! With this in mind, we wanted to give these younger kids a chance to add to their already-impressive skillset by giving them a chance to explore computer programming. Our goal is to help build up a new generation of kids who can become technology creators vs. just consumers, ultimately giving them a leg up in driving technological innovation early-on.”

10.  Code Ninjas encourages families to incorporate STEM education into their routine throughout the school year. With a robust, nine-belt curriculum inspired by martial arts, Code Ninjas keep kids excited and engaged, while parents see their children gain life-changing STEM skills. Parents across the country have witnessed firsthand how Code Ninjas has transformed their children in a fun, educational setting.

11.  According to David Graham, co-founder and CEO of Code Ninjas, “Code Ninjas continues to thrive at the forefront of the edutainment industry by giving kids the tools that they need to pave the way for a successful future. We are thrilled to add Code Ninjas JR to our curriculum and look forward to playing our part in making an impact on even more kids around the world.”

13.  With the introduction of the Studio model, forward-thinking entrepreneurs can now deliver Code Ninjas’ high-quality coding education to more communities nationwide. More families than ever can experience the life-changing opportunities that Code Ninjas offers through owning a franchise and building a community where children can have fun while gaining life-changing skills.

14.  Code Ninja Studio features reduced franchise fees and build-out requirements, coupled with lower overhead and staffing expenses, enabling prospective franchisees to get their business off the ground in a matter of weeks at a fraction of the cost. New franchisees also benefit from the brand’s unrivaled infrastructure, including development and support from in-house education, technology, operations, and marketing teams.

15.  Studio locations will have the flexibility to operate inside existing public-use spaces like local schools, colleges, community centers, and libraries. Through this model, franchisees will have complete access to the full offering of proprietary programs and curriculum, including Code Ninjas JR, CREATE, PRO, and Camps, with the same level of guidance and training for their instructors (Code Senseis) as they would through the traditional model.

16.  David Graham, co-founder and CEO of Code Ninjas, said, “Code Ninjas is committed to providing quality coding education to as many kids as possible. With Studios, we can broaden our reach and impact, as well as help current franchisees expand their businesses. We believe these new Studios are a win-win for both franchisees and smaller communities.”

17.  The first Code Ninjas Studios will be owned and operated by current franchisees who are looking to expand their business to reach more communities in different areas. Studio territories will not conflict with territories already being serviced by traditional Centers and will have their own claim to a protected territory. The new, flexible Studio model will only be available to new students who are not currently attending programs at an existing location.

18.  Code Ninjas was founded in 2016 by David Graham in Pearland, Texas. Graham was a computer programmer, who had started another business Coder Camps, which was a program that taught adults how to be successful software developers. Coder Camps was a success and when Graham became a father, he realized that there weren’t any quality coding programs for children. Graham also felt that coding was a valuable life skill as coders learn how to use logic, be resourceful, and solve problems, giving them a distinct advantage in everyday life. So Graham came up with the idea for Code Ninjas and built upon his previous success with Coder Camps.

19.  As Graham predicted, there was great demand for a program like Code Ninjas and the concept was an immediate success. Graham started franchising Code Ninjas in 2017 and the company had 25 centers open and over 225 more in development by the end of 2018. Today, there are Code Ninjas locations around the United States and Canada.

Gain the Insider Information (and Actual Earnings Data) You Need to Make a Safe and Smart Franchise Investment. Click Here to Learn More.

Gain the Insider Information (and Actual Earnings Data) You Need to Make a Safe and Smart Franchise Investment - See more at: https://www.franchisechatter.com/register/#sthash.le7wKJKM.dpuf