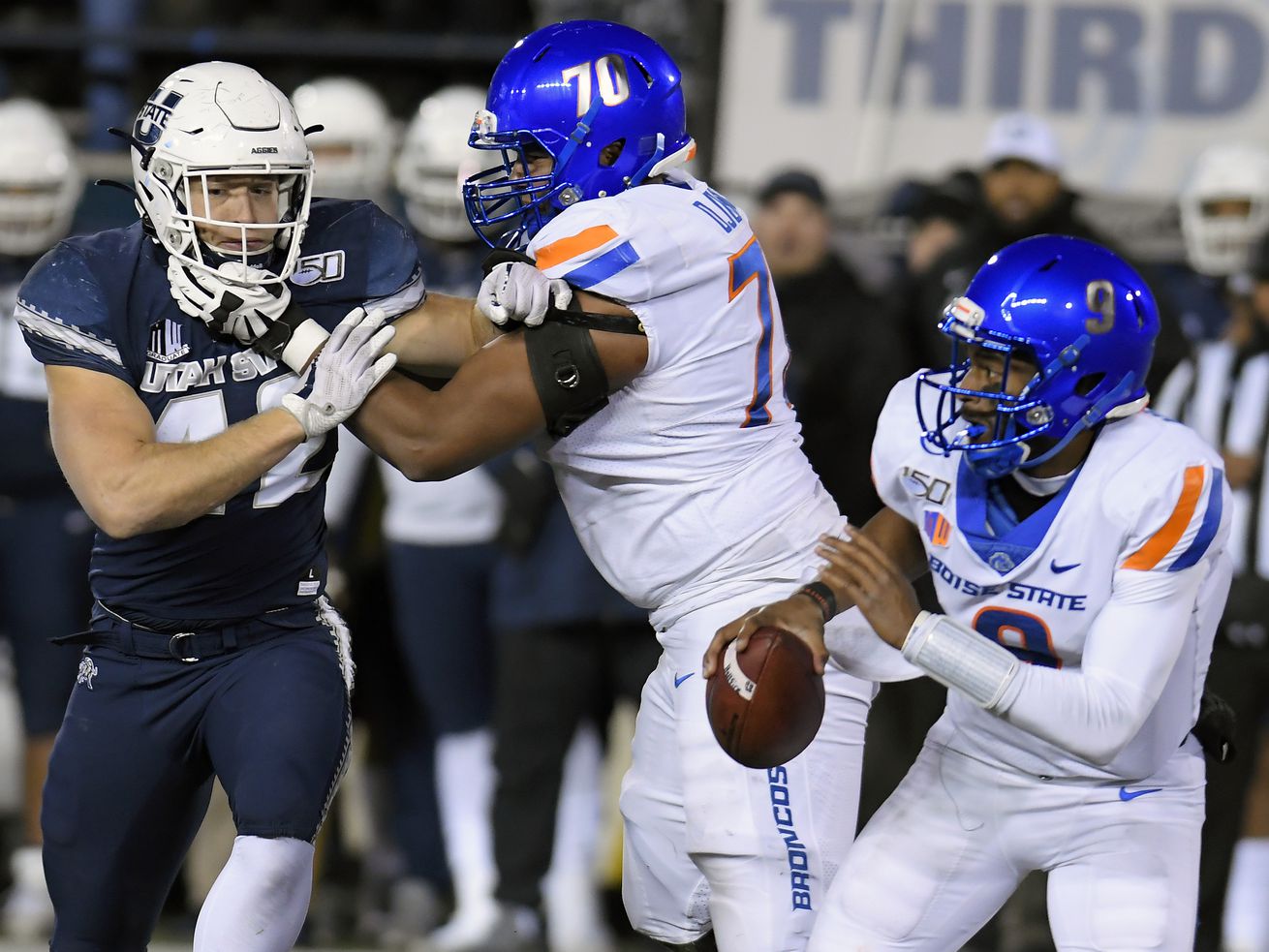 LOGAN — Nick Heninger is an outside linebacker again.

Most know Heninger as a defensive end, and a dynamic one at that. Last season, he was Utah State’s most productive pass rusher by far, as he recorded a team-high five sacks and a team-high 9.5 tackles for loss in what was his first season in Logan after transferring from the University of Utah.

That production came despite the fact that Heninger was behind Tipa Galeai and Justus Te’i on USUs two-deep depth chart, but whenever he was on the field, it felt as though he was constantly in the opposition’s backfield, harassing a quarterback here, downing a running back there.

One of Utah State’s most memorable defensive stands of the 2019 season came when Heninger and Te’i chased San Diego State quarterback Ryan Agnew 40 yards down the field to seal a road win for the Aggies.

Want to watch the San Diego State QB run backwards 40 yards and then throw the ball to an offensive lineman? Of course you do. pic.twitter.com/xxZ09U7RmS

The thing is, for the vast majority of his life, Heninger has been an outside linebacker. Starting in little league football — which can begin as early as kindergarten — and continuing through what was a standout prep career at Bingham High in South Jordan, Heninger played outside linebacker.

In his senior year at Bingham, Heninger was one of the best outside linebackers in Utah, recording 83 tackles, five sacks, four forced fumbles, an interception and nine pass breakups en route to First Team All-State honors from the Deseret News.

“I’ve played there pretty much my entire life,” Heninger said.

With the departure of standout linebacker David Woodward and, more importantly, a defensive shift from a 4-3 to a 3-4 scheme, the Aggies came into the spring desperate for linebackers, particularly of the outside variety.

“The outside linebacker crew is really important to us,” Utah State head coach Gary Andersen said.

Throw in Aggie coaches’ desires to get their best defensive players on the field at the same time, and it only made sense for Heninger to return to his roots.

“We moved some guys around a bit to make sure our best 11 are always playing,” co-defensive coordinator Stacy Collins said. “We want to mix things up.”

More than anything else though, the move back to linebacker — as well as his transfer from Utah to Utah State — was made with Heninger’s future in mind. He has designs on a professional football career, and a position change with the Aggies affords him the greatest opportunity to showcase what he has to offer.

“I feel like I am able to be an athlete again,” he said. “Not to say that I ever wasn’t an athlete, but I love playing in open space, playing both run and pass. As a D-lineman, I missed that. I missed dropping into coverage. I did that a little bit, but not as much as I used to, and I really missed that.

“Part of the reason I came up here (to USU) was I knew that I would have a greater chance of showcasing my talents. I could finally show what I have been working on for a while and let my play do the talking.”

None of that is to say that Heninger doesn’t appreciate the time he spent at defensive end. He’ll be the first to tell you that the lessons learned over the course of three seasons at Utah — one of which he redshirted — and another at USU have only worked for his benefit.

“When I went to Utah, that was my first time playing as a true D-end, so that was an adjustment going there,” he said. “That was my first time I played with my hand in the dirt in a three-point stance. I was able to learn and really work on my pass rushing craft. I really hadn’t done that in high school. I would do it occasionally, but I really got good experience at D-end both at Utah and Utah State.”

Enough experience that even as he moves away from the line of scrimmage, Heninger still expects to be the Aggies’ best pass rusher, if not the best in the Mountain West Conference.

“I still want to lead our team in sacks,” he said. “I’m not sure exactly how we are going to be playing it (the revamped 3-4 defense), but I think I’ll still have a lot of opportunities to rush the passer. I hope to and I would love to lead the Mountain West in sacks and (tackles for loss). I feel like those are some of my strong suits.”

“I feel like I am able to be an athlete again... Part of the reason I came up here (to USU) was I knew that I would have a greater chance of showcasing my talents. I could finally show what I have been working on for a while and let my play do the talking.” — Utah State outside linebacker Nick Heninger

Playing as a linebacker again should allow Heninger to showcase other skills as well — he wants a pick-6 or two — and display an improved sense of confidence that he feels was lacking at times in previous seasons.

The 2020 college football season is as in doubt as it has ever been, with threats of postponement or cancelation rampant. If the season is canceled, Heninger’s position change will mean little, and his NFL dreams will be dealt a serious blow.

The Aggies, Heninger included, are not immune to any of the noise as they call it — no one associated with the sport is — so the team’s focus throughout the spring and summer has been to “win the day” and just the day.

“With all this COVID-19 drama, it is really easy to get caught up in the noise about whether we will have a season or not,” Heninger said. “My coaches, they know my goals. My goal to play at the next level. They have told me, told all of us to just focus on the day, to win the day. Whatever happens (with the season and the pandemic), you have to stay focused on your goals.”

For Heninger, those goals begin and end where they always have, with him at outside linebacker.