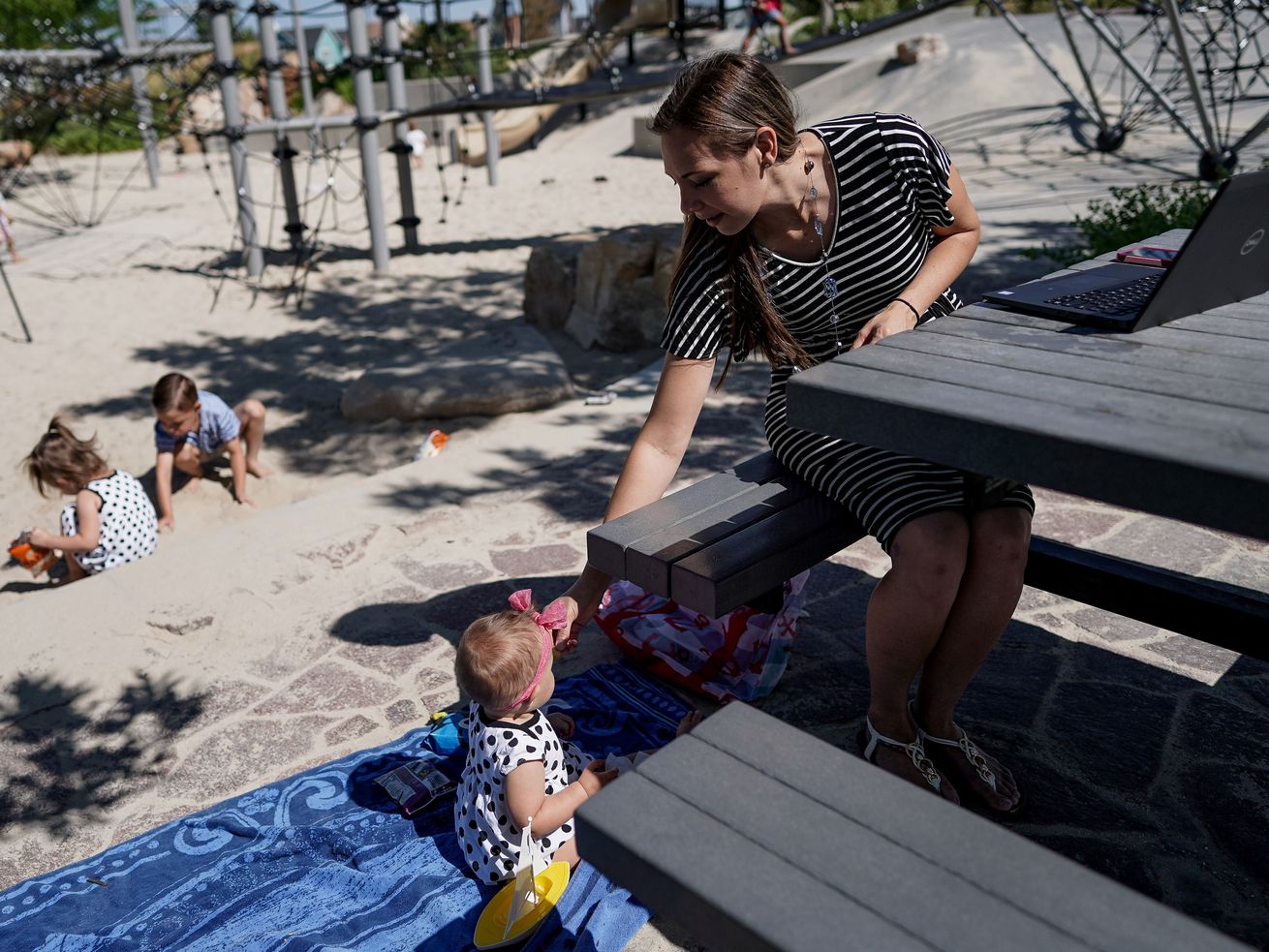 Support from government and private sector is needed to get parents back to work.

SALT LAKE CITY — When COVID-19 sent Lisa Jones home to telework, she envied her childless co-workers who responded to emails within minutes.

Jones was admittedly slower, as her new office space suddenly included a teething baby, a kindergartener who’d “lost his village” of school support, a clingy toddler trying to potty train and a middle child who ended up playing in a sandbox all day.

“It just wasn’t the same ballgame for me,” says Jones, 33, a single mom of four kids under 6 years old.

The COVID-19 pandemic has closed schools, shuttered child care centers and forced millions of parents to juggle full-time work and full-time parenting, not to mention full-time teaching for those with school-aged kids.

Roughly two-fifths of American families — 33.4 million — include children under 18 years old, and more than 15 million kids under six have all available parents working.

To say parents are exhausted is putting it mildly.

A new bipartisan poll of 1,216 voters nationwide found 8 in 10 voters (9 in 10 voting parents) want Congress to pass a childcare stabilization fund as part of their next COVID-19 relief bill, even if it costs upwards of $50 billion, according to the poll commissioned by the First Five Years Fund and Center for American Progress and conducted in early July.

A major step came Wednesday night, as the House passed two major child care bills, including the “Child Care is Essential Act” — which would create the stabilization fund.

As the country lurches toward reopening, experts and parents know that economic recovery will happen only as fast as we’re willing to seriously talk about who’s watching the kids.

“Anybody with a child in this crisis knows this is really a No. 1 issue,” says Matthias Doepke, a professor of economics at Northwestern University and co-author of a recent related pre-print paper. “Without solving child care, you cannot go anywhere near to having a normal economy.”

Within the next three months, nearly half of parents with at least one child under 6 will need to change child care arrangements, and 22% of parents are unsure about or unlikely to return to their pre-COVID-19 work situation, according to a recent report from the U.S. Chamber of Commerce Foundation based on a June survey of 562 parents from 42 states and more than 20 industries.

Even teleworking, which has been hailed as a game-changer for working moms, was only available to 24% of the low-income parents and 46% of the middle-income parents surveyed, making it an unrealistic long-term solution for many families.

While ensuring access to affordable, high-quality, out-of-home care is crucial, it’s not the only child care solution needed.

Experts increasingly note that companies — and the country as a whole — must support parents with polices that allow them to care for their children in ways that work for each individual family.

That should include paid sick and family leave (when someone has a baby or needs to care for aging parents), flexible schedules and an emergency back-up staffing infrastructure, says Ellen Ernst Kossek, a professor of management at Purdue University Krannert School of Management, who explores these concepts in a new paper about suggested updates to U.S. work-life employment policies.

Such policies are about giving people more choice, says Kossek, so they don’t have to “choose between their families and their own livelihood and well-being.”

In the past, when the topic has been raised, it’s been pushed aside, labeled a “private issue that families need to handle,” she said.

Yet the pandemic has forced the conversation, and the presumptive Democratic nominee has included a major care plan in his economic platform, leaving experts cautiously optimistic that perhaps the country is finally ready to see child care as a national imperative — not a private issue or a personal failing.

“Child care is a lifeline, unemployment insurance is a lifeline, robust health care insurance and paid sick time are lifelines,” says Shana Bartley, director of community partnerships at National Women’s Law Center. “These are not luxuries. People want to provide for their families, they want their kids to be well-fed and contribute in their communities. No one is looking for anything more than something to have their back and provide support in a time that is plagued with uncertainty.”

Learning this, she considered quitting and going back on food stamps.

She’d already been on them for nearly a year — after she experienced domestic violence and her husband filed for divorce when she was four months pregnant with their fourth child — but decided that wasn’t the economic future she wanted for her family.

A California native living in Salt Lake City, she has few family members close by, pandemic precautions have reduced friendly neighborhood connections to “stand in the driveway and wave,” and her ex-husband hasn’t wanted to be involved.

“As a single mother I do not have the luxury to fully dedicate myself to my home, my children or their education,” she says. “I rely on institutional support to make our world turn.”

But for Jones, and millions of other families, that support is gone.

By April, more than 50% of child care providers nationwide had closed, according to a survey by the National Association for the Education of Young Children.

Since then, some have slowly reopened — like Jones’ kindergarten-age son’s private provider — yet a majority are operating at or below 80% enrollment, meaning it’s increasingly difficult to pay teachers plus afford extra pandemic-level precautions.

Without financial help, only 18% of child care programs expect they’ll last a year, according to the association.

That blow compounds the problem of a country already riddled with “child care deserts,” areas that lack paid-care options, says Julia Barfield, senior manager of policy and programs at the U.S. Chamber of Commerce Foundation, which has been making the economic case for child care for years.

In response, families cobble together their own “child care equations,” blending any paid care they can find with family and friend care and school, allowing parents to work, or just get to a doctor’s appointment — support structures COVID-19 “just decimated,” says Barfield.

Without those structures, mothers are stepping up to carry extra pandemic-related caregiving burdens, and are increasingly stepping out of the labor force.

From February to April, women’s unemployment increased by 12.8 percentage points, compared to a 9.9 percentage point increase for men, and mothers of young children have reduced their work hours four to five times more than dads.

This has immediate economic consequences for families, as 64% of married U.S. couples with children have two working parents, and 75% of women in mother-led homes are working — but the long-term impacts are just as potentially devastating, rolling back decades of workplace gains for women and widening the existing gender wage gap.

Trying to staunch such losses, the federal government provided $3.5 billion in pandemic relief for state-level child care and development block grants through the CARES act in April, yet subsequent proposals — for an additional $7 billion or $15 billion as well as the $50 billion child-care stabilization fund remain in limbo.

“The ultimate reality is that we’re going to pay for it one way or another,” says Swenson. “Are we going to pay to help families get through these difficult months now, up front, or put a lot of families through a lot of misery and then come out in 2021 and see some shocking stats on women’s employment, or kids’ education and development and family poverty?”

Jones wouldn’t say she’s miserable, though she often feels like Atlas with the world on her shoulders.

Her company’s been good about flex scheduling, but she’d love to see them open an on-site child care program, so when office work resumes she could eliminate the hourlong drive to deposit 4 children in three different care programs before she clocks in for the day.

But for now, she’ll continue sending emails with a baby on her knee, and bathing kids while muted on Zoom meetings.

If help doesn’t come soon, she worries her piecemeal approach will only get worse, as she tries to “somehow be everything to everyone all at once,” she says. “I would be stretched too thin and no one would be getting 100%. This scenario is not sustainable.”