Chinatown is one of Boston’s most vibrant neighborhoods, an entry point for generations of immigrants and now home to 12,800 people. It boasts a diverse array of pan-Asian eateries, grocery stores, hand-pulled-noodle restaurants, dim sum palaces, bubble tea cafés, and herbal medicine shops, all mixed in among the usual convenience stores and gift shops. It’s become so popular for its cuisine, in fact, that visitors (and even locals) can familiarize themselves with the area on a Chinatown Boston food tour.

The official entrance to Chinatown is this decorative gate, called a paifang, a gift from the government of Taiwan.

Located at the edge of the Financial District, not far from South Station, Chinatown marks the beginning (or end, depending on your perspective) of the Rose Kennedy Greenway, which makes it an even bigger draw for tourists. But its central location has also made it a growing target of gentrification, as rents increase and luxury towers loom over the original three- and four-story buildings that have long housed families, small businesses, and the Chinese family associations, or fangs, that help newcomers acclimate to life in America and foster community among those with common surnames or ancestors. 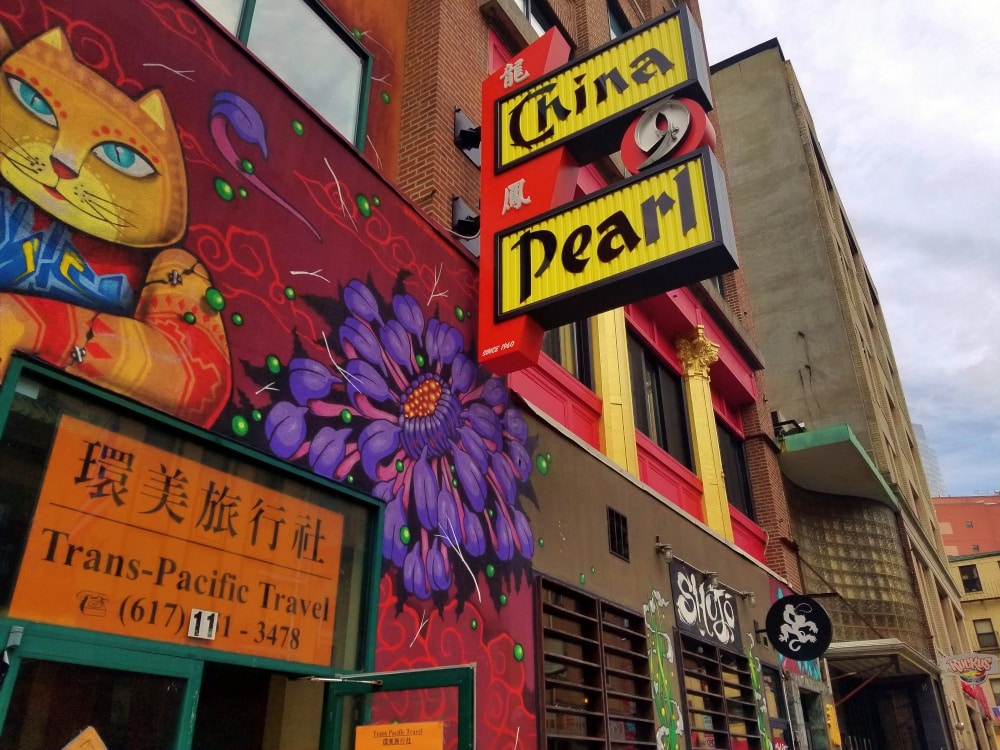 China Pearl is one of Boston’s most enduring dim sum restaurants. Behind that, Shojo, a relative newcomer, serves modern Asian fusion and craft cocktails.

Chinatown’s core identity remains strong. You still see men playing xiangqi, Chinese chess, in Mary Soo Hoo Park near the gate, and Chinese families still fill the shops on weekends to stock up on kitchen essentials. Activist groups such as the Chinatown Community Land Trust are working to preserve affordable housing. Still, many families have left Boston for the growing Chinese communities in nearby cities and towns like Quincy and Malden. 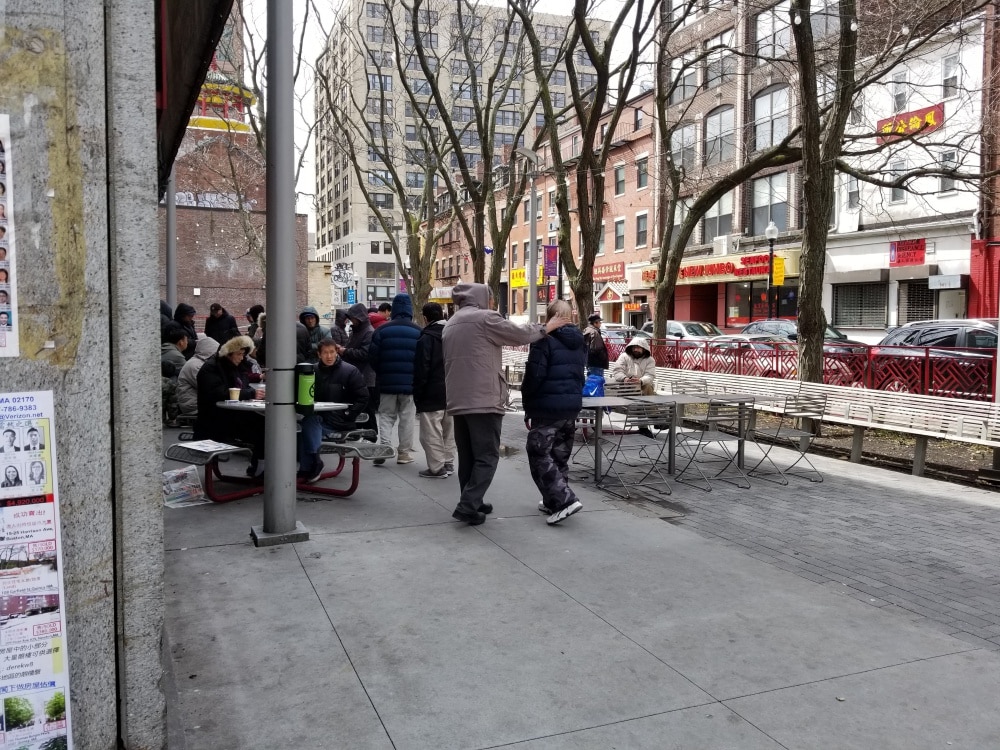 Aware of these changes, and feeling I’d only scratched the surface of the neighborhood despite many years of living in Boston, I signed up for a Chinatown Boston food tour with Jacqueline Church, a food consultant, cooking teacher, and longtime resident of the neighborhood. Married into a Cantonese family, Jacqueline has an insider/outsider perspective that makes her an great teacher and savvy guide. 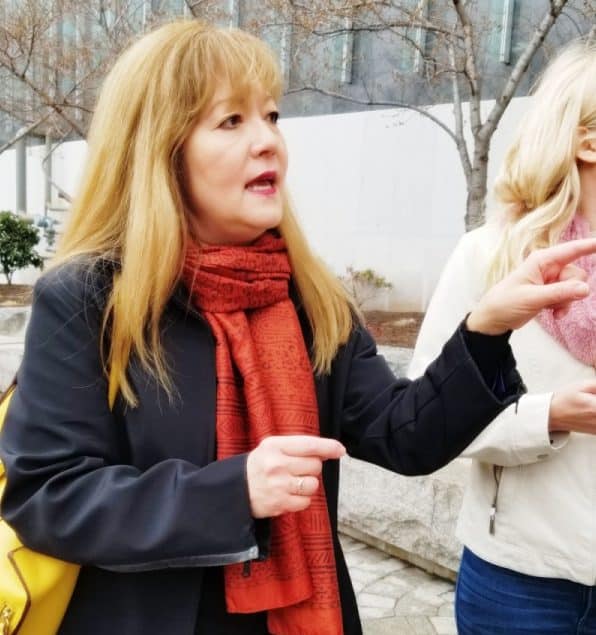 After we got our bearings at the gate with a quick lesson on Chinese history and regional cuisine, Jacqueline began the Chinatown Boston food tour at G-Mart (109 Lincoln St.), an Asian supermarket just across Surface Road. In the produce section, we spied durian fruits, Asian pears, pomelo, and multiple varieties of bok choy (Jacqueline recommends Shanghai baby bok choy for its tender stems). She pointed out the best fish sauce (Three Crabs), black vinegar (Chinkiang, which is aged in wood casks, like balsamic), and tofu (Chang Shing, from nearby Cambridge). At the fish counter, she explained that while westerners tend to inspect the clarity of a fish’s eyes for freshness, customers at a Chinese market look for red or pink gills. 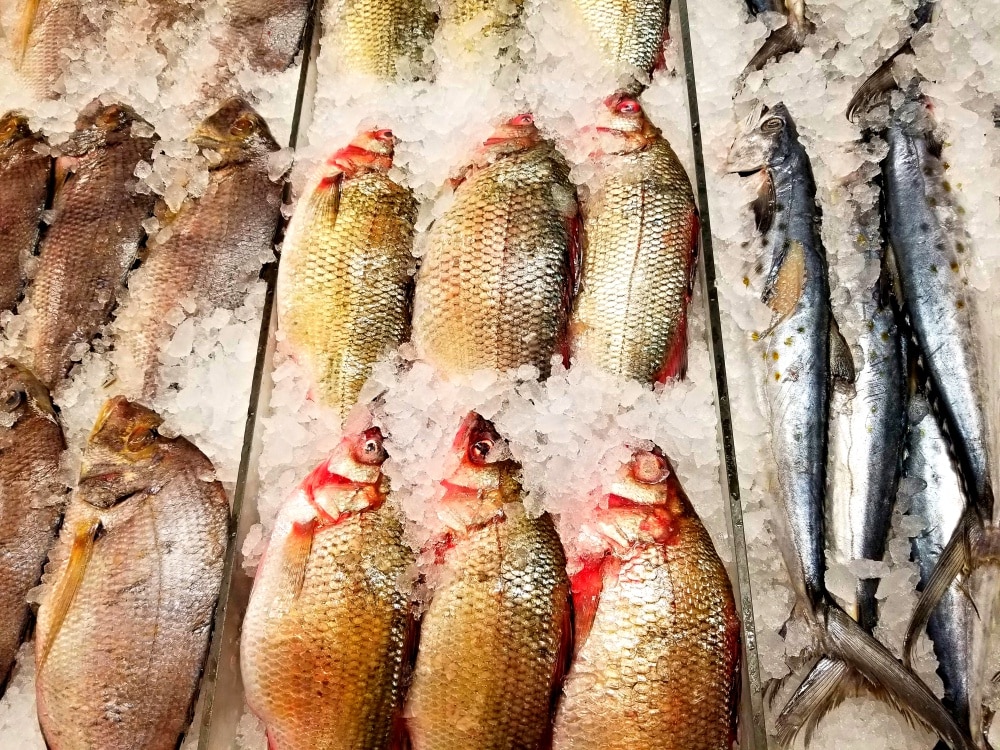 Next stop: Great Barbecue (15 Hudson St.), for a taste of char-siu, Hong Kong–style barbecue pork ribs scented with tangerine and ginger. Small shops like this are easy for newcomers to overlook, but they are woven into daily life here in the neighborhood. 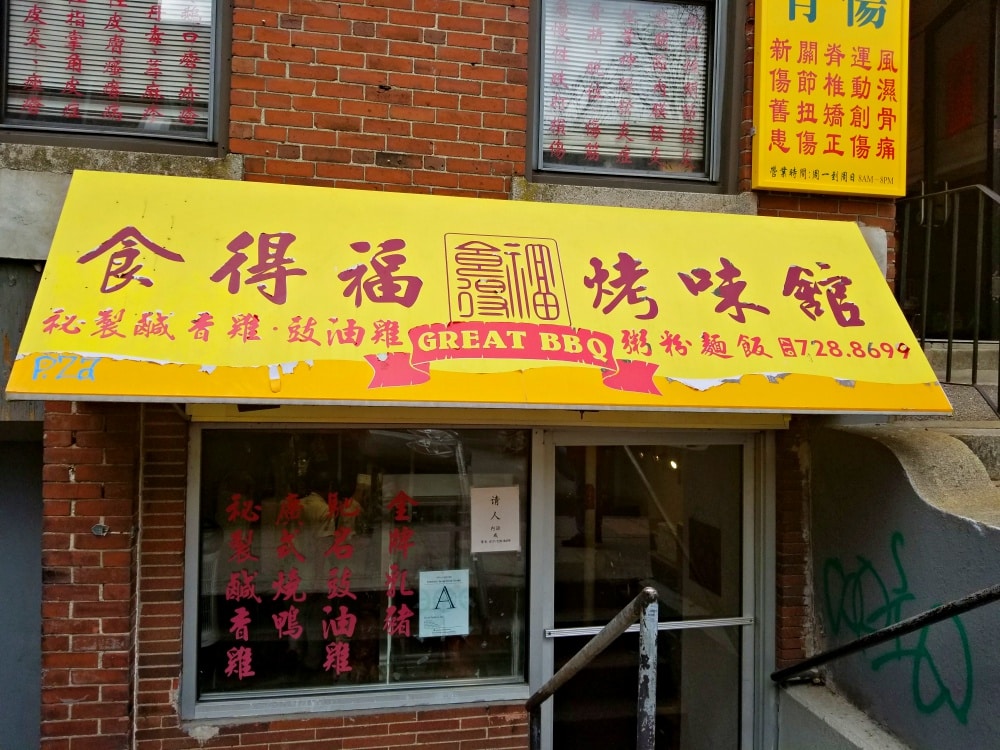 At Great Barbecue, “sometimes I come here in the morning and there’s a whole roasted pig awaiting pickup for a family feast,” Jacqueline says.

Ah Ming is the cleaver master at this shop, and his soy-marinated chickens, roast ducks, and roast pork were lacquered and gorgeous. Like a French rotisserie, Great Barbeque offers cooked meat to go but with a more complex range of flavors: spice and citrus, honey and soy, hoisin and rice wine. 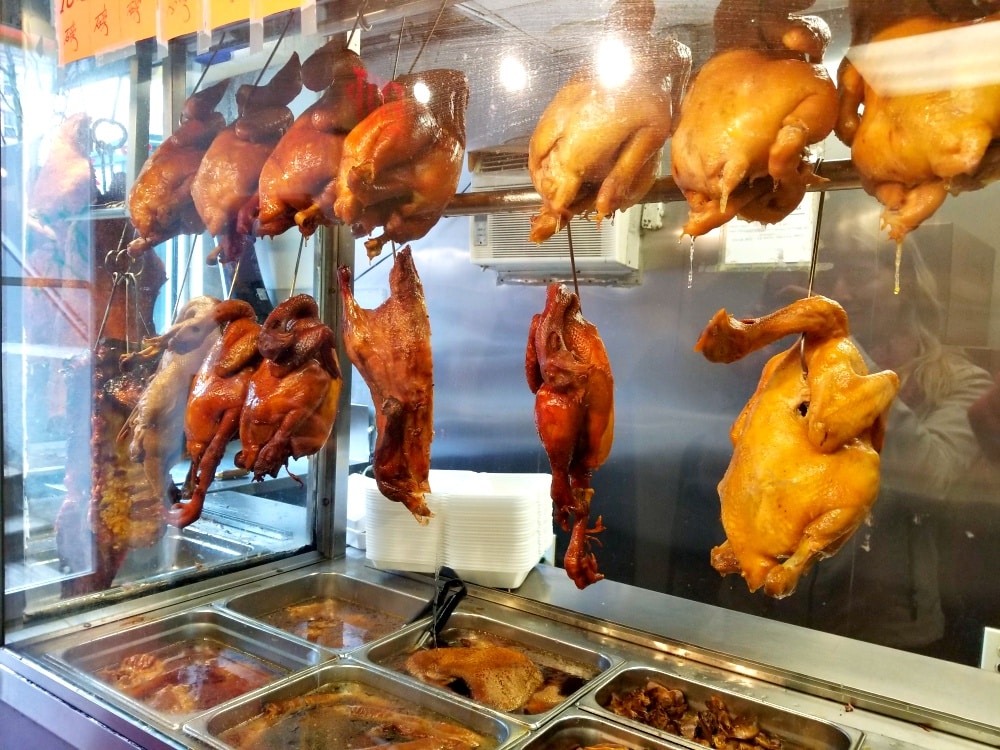 Chickens and ducks are roasted whole, with head and feet attached, both to avoid waste and because this is traditionally thought to bring good luck.

At Ho Yuen Bakery (54 Beach St.), we first sampled addictively tender buns filled with sweet coconut paste, then golden moon cakes, which are traditionally eaten during the Mid-Autumn Festival but have become popular year-round treats to cut into thin slices and share over tea. 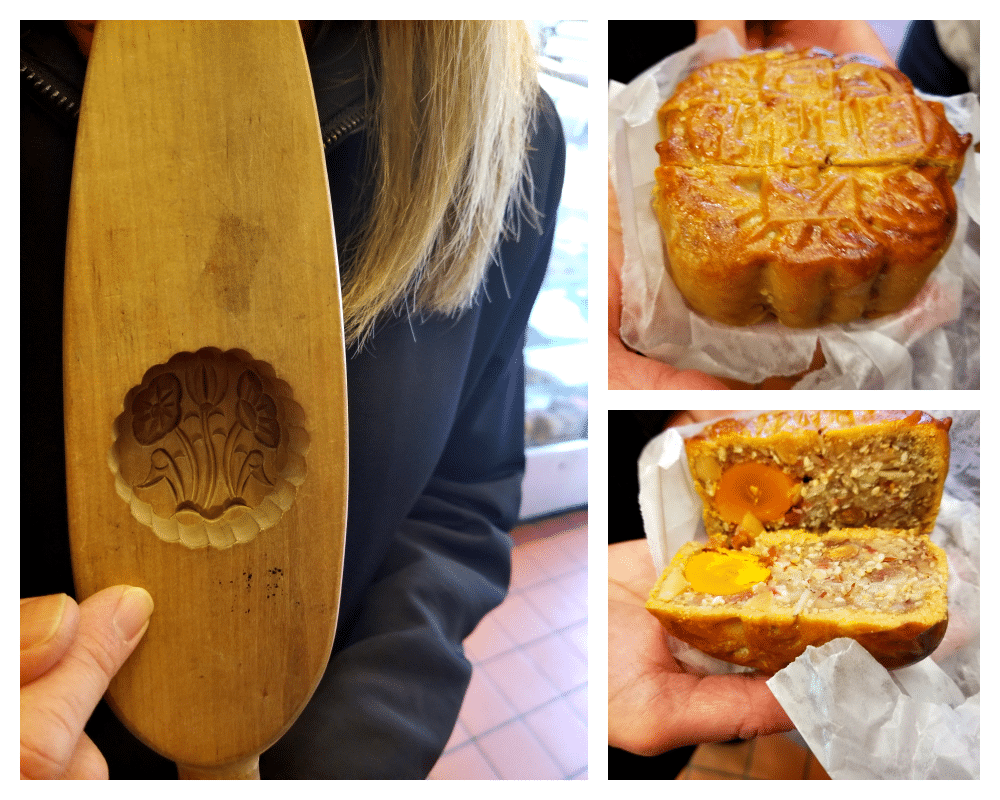 Clockwise from left: A small moon cake mold; a “five kernels” moon cake filled with a sweet mixture of seeds and nuts; the cake’s interior, containing a whole salted egg yolk to symbolize the full moon.

At Nam Bac Hong (75 Harrison Ave.), a Chinese apothecary, proprietor Patrick Soo waved us in as Jacqueline shared some of her favorite traditional Chinese medicinal (TCM) remedies, from chrysanthemum tea for seasonal allergies to white flower balm for headache. On most days, an on-site herbalist does consultations in the back of the shop, evaluating customers’ health and recommending personalized remedies blended from the herbs that are kept in a large cabinet at the front of the store. After being treated for several years, Jacqueline says she’s concluded that “while Western medicine is great at diagnostics, quite often our treatment is about treating symptoms. The Chinese way of thinking is, Let’s correct the underlying problem that creates the symptoms.” And most remedies cost about $10 — much less than the average copay. While no one on our tour seemed likely to quit Western medicine, including Jacqueline, learning about TCM was another window into a culture that was becoming more fascinating and richly nuanced as the morning went on. 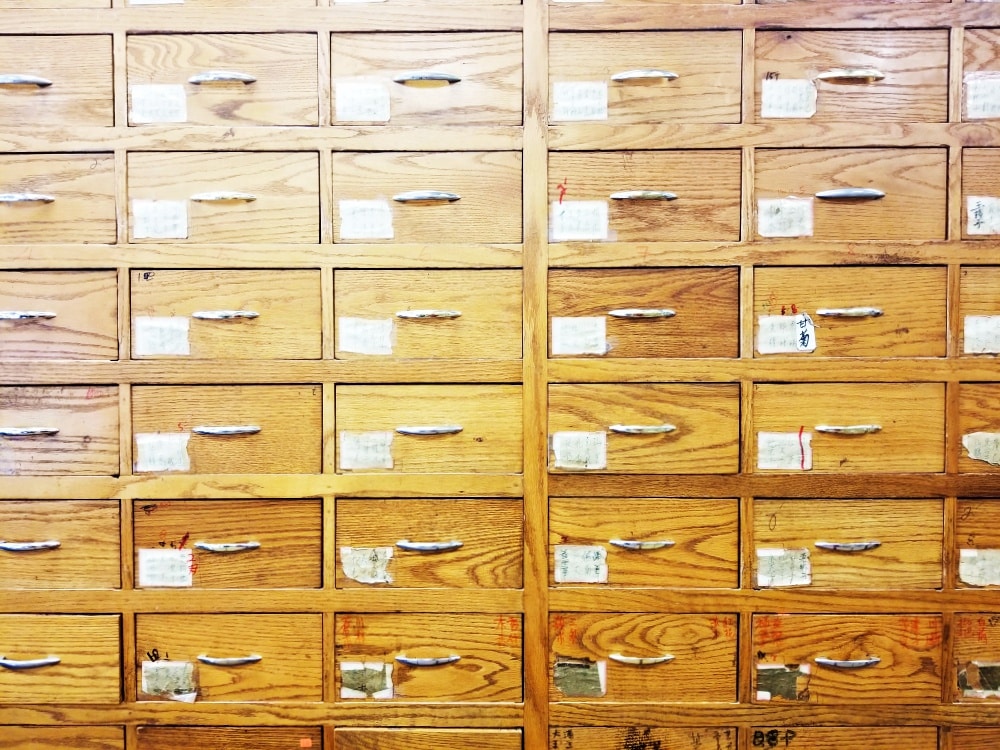 The herbs in this cabinet at Nam Bac Hong are organized in rows by the organ systems that they treat.

After a quick stop for hot and cold bubble tea at Tea-Do (8 Tyler St.), we capped off the tour with a dim sum feast at Hei La Moon, Jacqueline’s favorite spot (and the site of her own wedding banquet). By midday, the restaurant is always packed, and we arrived to find the entry lined with would-be diners, but the hostess waved us in (“It helps to have connections,” Jacqueline whispered).

We sampled multiple dumplings, from  pork buns to shumai. Jacqueline also explained a bit about dim sum etiquette, such as serving dumplings with the non-eating end of your chopsticks, tapping the table with two fingers as a way of thanking your companion for filling your tea cup, and leaving the lid of the tea pot ajar to signal that you want a refill. 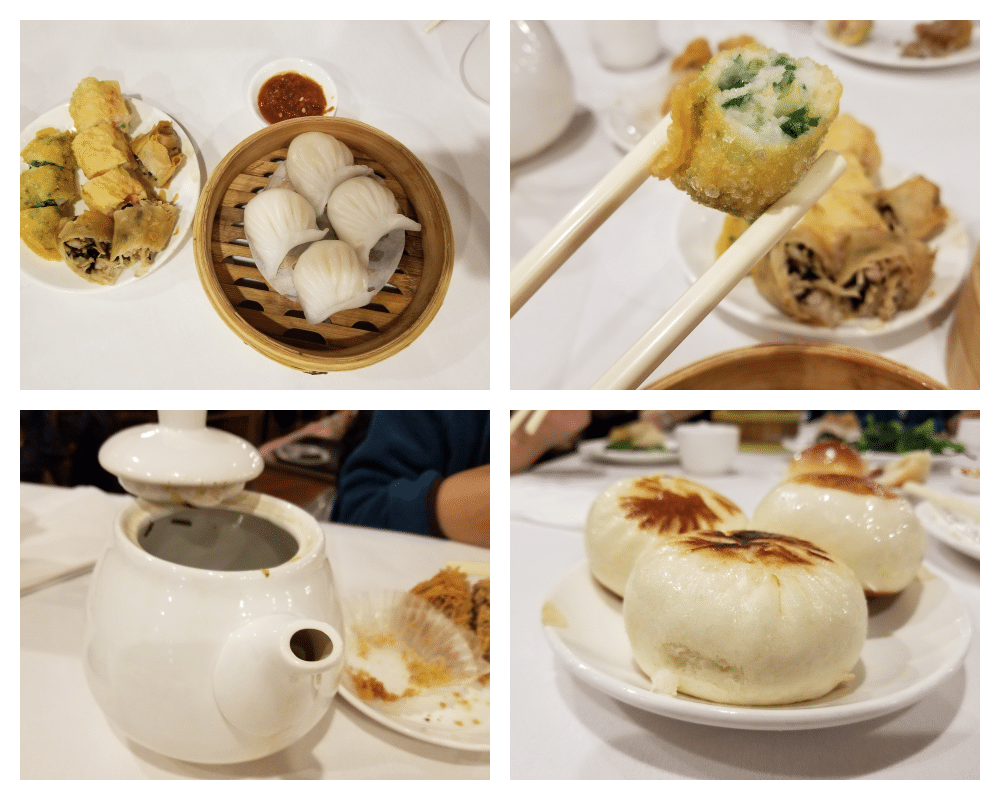 Clockwise from top left: On the small plate: fried garlic chive dumplings, tofu skin stuffed with shrimp and Chinese celery, and spring roll; in basket: har gow (shrimp dumplings); a close-up of the chive dumplings; baozi buns filled with pork and cabbage; setting the teapot lid ajar is the proper way to signal to a waiter that you need more tea.

I left the table unable to eat another bite, but I still circled back to Ho Yuen to pick up sweets on my way home. A great Chinatown Boston food tour does that, giving you a foundation to build on, while always leaving you hungry for more.

Have you been on a Chinatown Boston food tour?

This post was first published in 2018 and has been updated.