I’m not saying the liver is exactly like a fairy-godmother, but its job description sure does involve a lot of marvelous transformations. When life hands it toxic compounds, it has an uncanny ability to transform them into non-toxic, water soluble molecules that pass right through our bodies.

But not everything is as easy as bippity-boppity-boop. That’s because while toxins have always existed – think arsenic and snake bites – there isn’t another time in history that our detoxification systems have faced the workload that they do now.

Not only have human activities like mining released massive amounts of naturally-occuring heavy metal toxins into our air, water, and soil, they’ve also created whole new categories of toxins that our bodies have to deal with, including:

That’s why I take steps to support my liver’s efforts by reducing my chemical body burden, optimizing my detoxification pathways, and of course making this easy liver love tincture recipe.

As always, I want to mention that none of these statements have been evaluated by the FDA, this article is not medical advice, and it is not meant to diagnose or treat any condition. Please talk with your healthcare provider about any herbal remedy or supplement you are considering.

Now, here are the herbs we’ll be using:

Anytime the liver has extra detoxification work to do, think milk thistle!” – Herbal Medicine for Beginners (3)

Milk thistle (Silybum marianum) has been used as a potent yet gentle liver tonic since at least the 1st century, when Pliny the Elder wrote that it was “excellent for carrying off bile.” (4)

Bile, as you may have read in this article, is one of the primary ways the liver pushes toxins toward the colon so they can be flushed out of the body. So . . yeah, pretty important!

It’s thought to support detoxification in a few different ways including:

Important note: Water is NOT effective for extracting milk thistle’s primary therapeutic constituent, silymarin. Alcohol is the best option for pulling out this “hard to get” compound, which why this recipe is for a tincture instead of tea.

If you’re wondering if glycerin can be used as an alcohol-free alternative, the answer is . . . possibly. Even if undiluted glycerin is used (for the most extraction capability) the glycerite will still be significantly lower in potency.

For more info on the pros and cons of different extraction methods, check out this article.

Something weird but true thing about bitter herbs like dandelion root (Taraxacum officinale):

When our taste buds detect bitter compounds, they “recognize the taste as being potentially poisonous. As a result . . . our systems go into full alert and digestive juices start flowing in order to mitigate any poisons entering our system.”

In other words, the bitter compounds in some herbs get our digestive systems all revved up, which increases our ability to absorb and use the nutrients we are taking. Plus, instead of being poisonous, dandelion root contains a wide variety of detoxification supporting compounds including taraxacoside, taraxasterol, lutein and apigenin that encourage healthy bile function and support the liver and gallbladder. (8) (9)

When brewed as a tea, it also contains prebiotics that support gut health, but it’s the more alcohol-soluble compounds we’re after in this tincture.

Although the cockle-burs (seeds covered in stiff spines) found in burdock root (Arctium lappa) inspired the invention of velcro, this herb is far more famous for its therapeutic benefits.

Traditionally used for a variety of purposes – even as an aphrodisiac – it contains a wide range phytochemicals that support:

The more I use this yellow wonder, the more uses it seems to have.” Karta Purkh Singh Khalsa, Herbalist and author of The Way of Ayurvedic Herbs (12)

Though turmeric (Curcuma longa) is often referred to as an anti-inflammatory plant, herbalist Rosalee de la Foret says that it’s actually more accurate to say that it helps the body adapt it’s inflammatory response as needed. (12)

Short-term inflammation can be beneficial because it stimulates a variety of healing responses, for example by increasing the flow of white blood cells to an injury so they can support recovery.

Turmeric doesn’t block “the beneficial aspects of inflammation” in the same way that anti-inflammatory medications do. Instead, it supports the body in doing the repair work that inflammation is meant to initiate, such as:

When you go to the grocery store and pick up an artichoke, you’re actually holding the flower of the artichoke (Cynara scolymus) plant. While they are absolutely delicious in dips, stews, salads and more, herbalists are more interested in the leaves that grow beneath the flower.”

And think about it – the world grows this bulky plant for the few flowers we put on our plates. And what happens to the huge mass of leaves? Discarded. Well, no more! Give us herbalists the leaves, and we’ll take care of those tired livers.” – Christophe Bernard (12)

For thousands of years this relative of milk thistle, dandelion and burdock root – artichoke – yep, they’re all related – has been prized for its ability to support liver function and resilience. (14)

It contains the flavonoid compound known as silymarin (which is also found in milk thistle) plus cyanarin, which is made from organic acids and tannins.

Artichoke leaf is the most bitter of all the bitter herbs in this formula, so a little goes a long way.

Now, let’s get to the recipe! 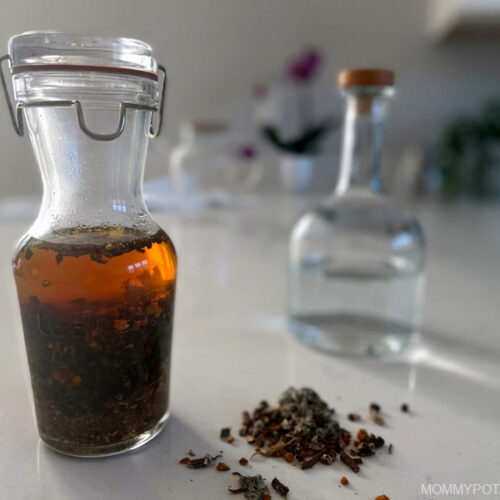 Made with nourishing herbs that are supported by both ancient tradition and modern research, this tincture is perfect for giving the liver a little extra love.  This formula is a 1:5 tincture in 50% alcohol.
Prep Time 5 minutes
Servings 120 half teaspoons
Calories
Author Heather Dessinger

How Much Is Recommended?

The amount I use is loosely based on the optimal therapeutic ranges recommended for these herbs. Many of them are eaten in food-like quantities and are generally considered safe.

For example, in Adaptogens in Medical Herbalism, author Donald Yance writes that “Turmeric is pharmacologically safe; it has been consumed as a spice at doses of up to 1,000 mg daily for centuries.”

Burdock root can be used in stir fried dishes and soups, and dandelion leaves and flowers are used to make salads, fritters and more.

Artichoke leaf isn’t really used as a culinary herb, but clinical trials have used dosages ranging from 600 mg/day to 2,700 mg/day of artichoke leaf extract (in divided doses) for two months, and according to Drugs.com the reported negative effects included:

“Mild, transient, and infrequent adverse reactions, generally limited to GI complaints such as bloating and flatulence” (15)

How Safe Are These Herbs?

The Botanical Safety Handbook classifies milk thistle seed, burdock root, dandelion root and turmeric root as Safety Class 1A herbs, which is the safest rating possible. Herbs in this category are described as:

Artichoke leaf is not discussed in the Botanical Safety Handbook, but another valuable herbal text – The Modern Herbal Dispensatory – only gives one caution regarding it:

“People with an existing hypersensitivity to any member of the Asteraceae family should use caution.”

With that said, other sources say that it should be avoided by bile individuals with known bile duct obstructions or gallstones. (15)

Can this tincture be made with an alcohol-free base?

Water is not effective for extracting milk thistle’s primary therapeutic constituent, silymarin, and herbalists are split on whether glycerin is an effective solvent for it. Personally, if I were to make glycerin-based extract (glycerite) for liver support I’d take one of two approaches:

How is a glycerite made?

The basic process involves mixing glycerin, herbs and sometimes water together, then using heat to extract the compounds. The amount of water needed varies depending on the strength of the solvent needed, just like some herbs are best extracted with low-proof alcohol and some are extracted with higher-proof alcohol.

If you would like to learn more about making glycerites let me know in the comments and I’ll create a tutorial for you.

Milk Thistle Seasoning – Rich in minerals, liver-loving compounds and – most importantly – FLAVOR, this seasoning salt is super easy to make and perfect for sprinkling on savory dishes.

2. The Atlantic (2014) The Toxins That Threaten Our Brains