When I was a kid, my local church youth group had a few arcade machines all hooked up in a row and set to freeplay. I didn’t get to go to arcades often, so the various events when the machines were all on at once were absolutely magical for me. They had the classics like Ms. Pac-Man and Centipede, but I really only cared for one machine; that being a racing game called California Speed. I would queue up for a race, finish it, then head right to the back to play again. (Just between us, there were more than a few times I’d slip away at lunch while volunteering during the week just to get a few races in.)

Since then, I’ve been aching for a game like it, to no avail. There have been games similar to it that were just as wacky, had cheesy announcers and even played similarly, yet none have ever caught my eye the way it did. Enter Hotshot Racing. From the moment I saw the initial reveal trailer what feels like years ago now, I knew I needed to play it. The colors were vibrant, the racing was fast-paced and aggressive, and the music was about as arcade as it gets.

Hotshot Racing’s art style was the first thing that drew me in. I’m a big fan of low-poly 3D graphics – they can create extravagant worlds and landscapes that are simple to the eye, yet incredibly complex in the imagination. This lower-poly style ends up benefiting Hotshot Racing in ways beyond just pure aesthetics, as well. Thanks to the simplicity of the models and environment, the presentation overall can be flashy and vibrant without hurting the frame rate. In my time playing, the game maintained a buttery smooth 60 fps in handheld and docked, and the frame drops I did encounter were so few that they barely even need mentioning. 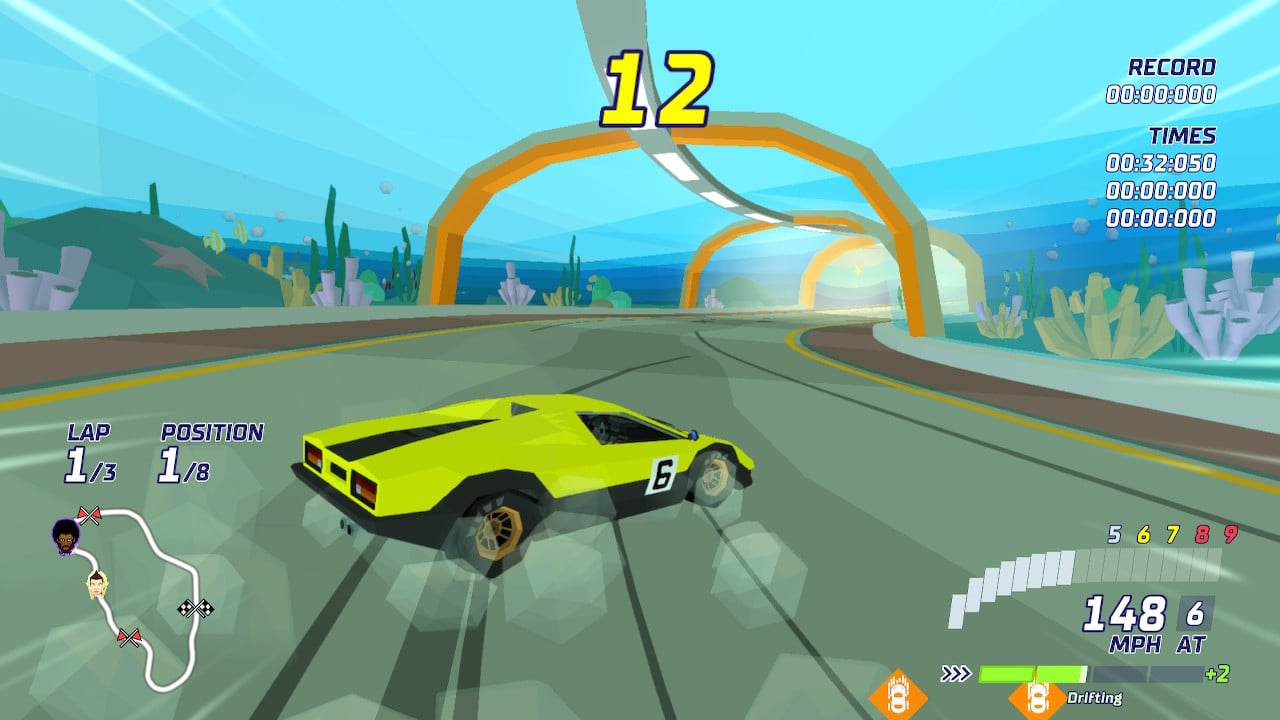 The game’s music and announcer put me right back to my childhood, tearing up the track from behind the wheel of a big arcade cabinet. The high-energy techno tunes fit perfectly with the vibrant graphics and high octane arcade action, and the announcer’s often-cheesy delivery feels completely authentic to the arcade experience. The sounds emanating from this game would’ve easily caught my attention from the other side of an arcade as a kid, beckoning me to put my feet to the pedals and my skills to the test, and that’s high praise from me.

Hotshot Racing is full of personality, from the wacky characters and tracks to the vibrant colors and varied cars. There’s also a fair number of pop-culture references hiding throughout the experience – my favorites being a Jurassic Park reference the announcer makes on the Dino Dash track, as well as the racer named Marcus sometimes shouting “that hedgehog has nothing on me!” while using his boost.

The game has 16 different tracks spread across four themes: cities, snowy mountains, dense jungles, and a tropical island. While the tracks are vibrant, interesting and even downright silly at times, the fact that there’s only four themes can lead to a bit of repetitiveness — especially when playing the game’s Grands Prix one after another. It would’ve been nice to see more themes incorporated to add more variety, and it would definitely be a welcome addition in a future DLC or sequel. With how off-the-wall the game’s personality already is, something like a space station or an abstract alternate dimension could fit in perfectly.

Hotshot Racing plays exactly how you’d imagine an authentic arcade racer would: High speeds, aggressive jockeying for placement and long drifts fit for a Fast and Furious movie. The steering feels responsive and the act of drifting is incredibly satisfying. When playing solo, the AI is ruthless – trading paint and trying to spin you out any chance they get, and I loved every second of it. The push and pull of drifting and drafting to build up your boost meter and slingshot past opponents keeps the pack tight, and makes most of the races a genuine fight to the finish. 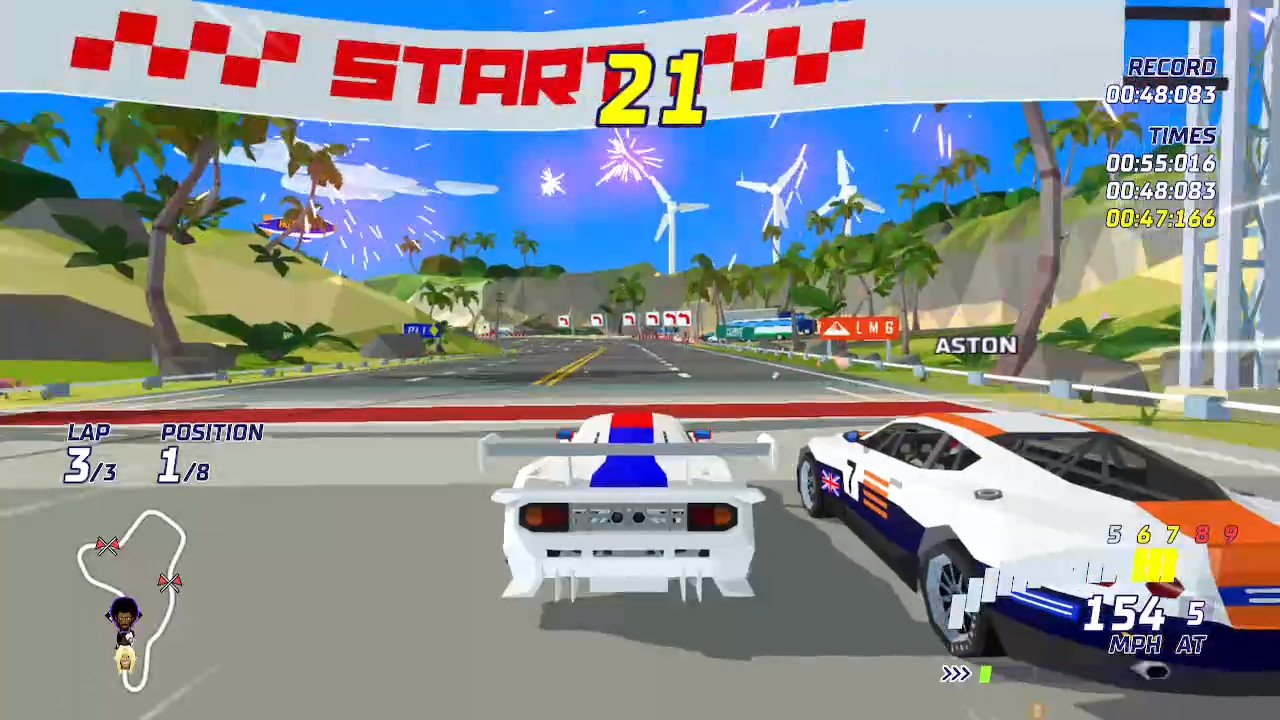 The game is bursting at the seams with unlockables and customizations, from spoilers and hood scoops, to bobble heads and fuzzy dice. None of the customizations affect the performance of the cars, but the sheer number of them actually caught me off-guard and was a more than welcome surprise. Players unlock new customizations through challenges that are broken into three hidden categories: racer, car, and overall. Games that hold this true to their arcade inspiration often run the risk of being overly-repetitive, so having challenges to chase and extensive customization like this goes a long way to keep the game fresh and highly replayable – even for solo players.

If you ain’t first, you’re last

Hotshot Racing includes the staple modes of the racing genre such as, Single Race, Grand Prix and Time Trials, along with a pair of more wacky modes in “Drive or Explode” and “Cops and Robbers”.

Drive or Explode is pretty self-explanatory; if players dip below a certain speed for more than a few moments, they’re punished by a blast that ends their race instantly. Players begin with a rolling start, and each checkpoint increases the base speed required to keep the bomb from going off, leading to a frantic battle to maintain your momentum while keeping a safe distance from other racers who are trying to do the same.

The Cops and Robbers mode, meanwhile, plays like a game of infection, where players are chosen to be cops or robbers at the outset. Cops are tasked with hunting down and eliminating escaping robbers, while robbers are tasked with evading the law for three laps. Defeated robbers are “Deputized” and join the chase to bring the remaining robbers to justice. The longer players spend as robbers, or the more robbers they deputize, the more money they amass, with the goal to win being the wealthiest player by the end. Of all the modes in the game, this one has the highest potential for being a hit with groups of friends playing online or locally. 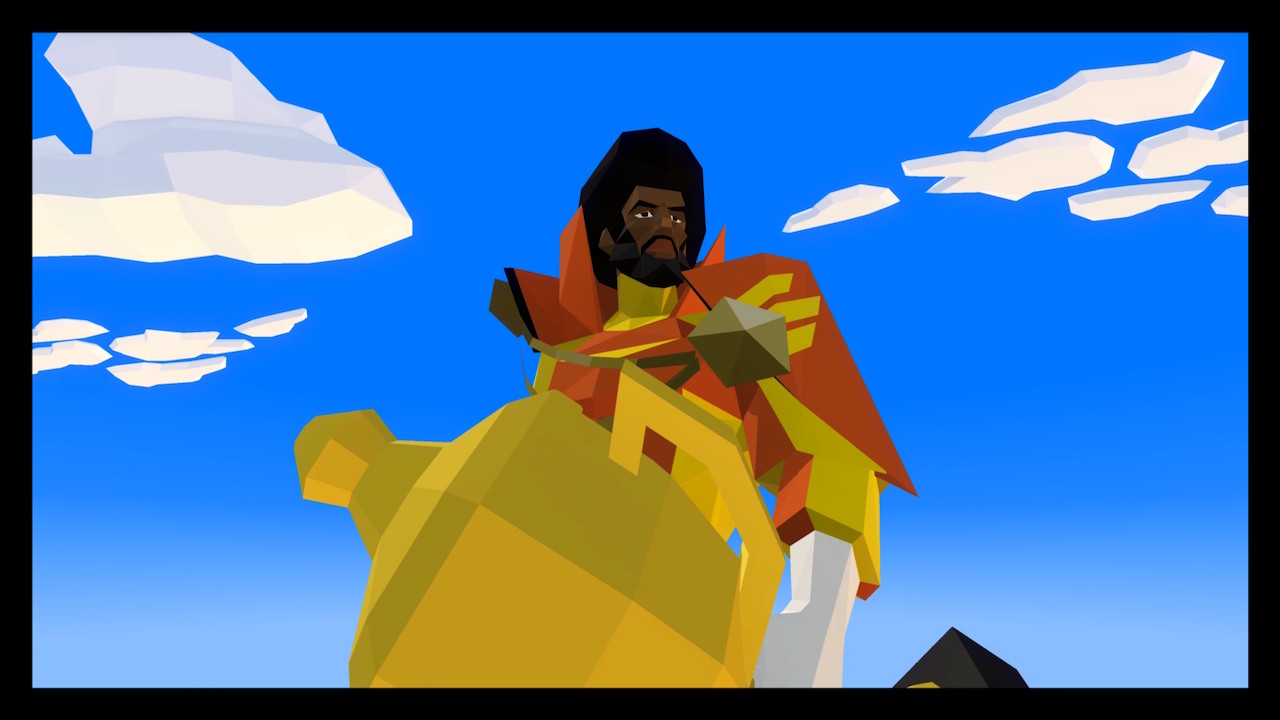 The game’s Time Trial mode is very similar to its contemporaries, yet has an interesting twist that I quite liked. In most racing games, time trials are a three-lap race against the ghost of another player for the best overall time. In Hotshot Racing, players are still trying to best other players’ ghosts, but the race itself is an infinite loop with the goal being to achieve the best single lap time.

All of the modes except for Time Trial can be played solo, online, and local split-screen with up to four players, which is really nice to see from a game in 2020. Couch co-op and competition are alive and well in this racer!

With how many times Hotshot Racing was delayed, I genuinely thought it would never come out, and if it did, it would be thoroughly disappointing. Gosh was I wrong, and I am so happy to be able to say that! This game is a blast to play, and fans of the arcade racing genre should definitely take notice. Its colorful visuals, polished mechanics and exciting gameplay are an absolute joy to experience, and its plethora of unlockables ensure that there’s always one more thing to accomplish. While it doesn’t have the most tracks, and its four track themes leave a bit to be desired, there’s no denying that this is the latest gem in the Switch’s already legendary catalog of indie titles. 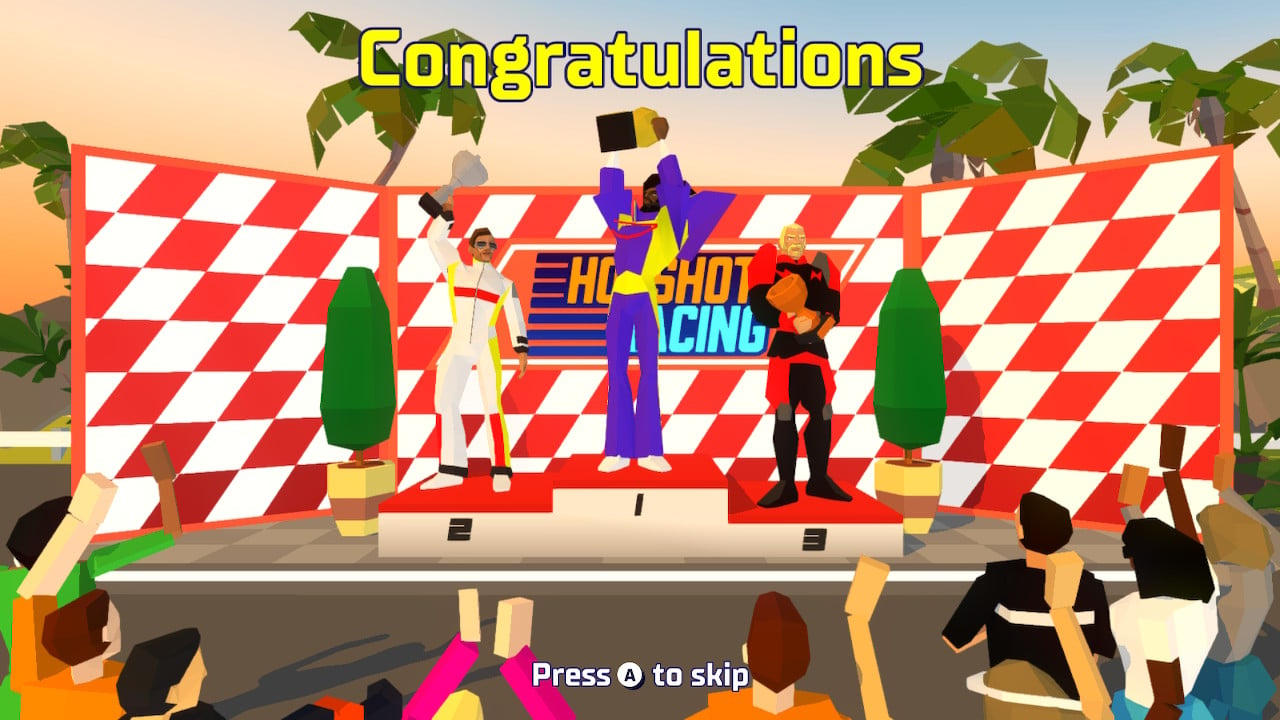 If you’re a fan of the arcade racing genre, or are looking for a game to spice up your multiplayer hangout nights, you can’t go wrong with Hotshot Racing!